The following is a eulogy I delivered on behalf of the Academic Senate for California Community Colleges and all of Doug Sabiston’s ASCCC colleagues during his recent memorial service.  Many thanks to Greg Gilbert, past Executive Committee members and friend of Doug’s, for drafting this eulogy.  We will miss Doug at our plenary sessions and other events.

In the opening of his book, Backpacking Two Miles High, Doug Sabiston writes, “The adventures, forever trail heads to excitement, continue through years and more years, over the high passes where the sky opens up to the wilderness on the other side.”  For Doug Sabiston, life was not only comprised of trail heads to excitement, it was a journey rich in loving companionship.

My name is Julie Adams, and today I’m here representing Doug Sabiston’s friends and colleagues from California’s 61,000 community college professors.  I had the distinct honor of serving as the Executive Director of the State Academic Senate for California Community Colleges for more than 18 years, an organization that counts Doug Sabiston among its founders. While the Senate is the largest non-union higher education organization in the United States, to Doug it was an assembly of friends and colleagues entrusted with the future of California’s 2 million community college students.

Over the years, I’ve always counted on Doug as one of my early mentors, a true friend always. In fact, on his retirement, the Senate honored him with Emeritus status. And Doug not only retired Emeritus from the state Senate, but from Contra Costa College where he taught business courses and, yes, was the founder of their academic senate as well. For his many contributions to California’s students, Doug was honored in 2008 as an inductee to the Contra Costa College Hall of Fame.

While most people would have been more than content with the accomplishments and accolades that embodied his professional life, there was so much more to Doug Sabiston’s universe. First, above all else, there was his devotion to family, to his wife Adelia, Dee, his life’s partner for 72 years, to his brother and his wife, and to all of the young women in his life: his daughters, granddaughters, and his great-granddaughters.

Doug’s largeness of life embodied also that of a poet scholar whose love of nature was so vast that it spilled over into two books and a collection of poems that celebrate in poetic terms and with a scholar’s attention to detail, the wonders of the natural world. In his second such book, Backpacking Two Miles High, he provides insight into his ability to cope with life’s pressures when he describes how people are “attracted by the vision of a wilderness adventure far from the tensions of modern life, of wild and spectacular scenery, of granite crags and ridges, timberline basins and deep, blue lakes, secret trails, passes, creeks, and, yes, the rocks.”

And for the many professors whose Senate Plenary sessions would not have been complete without their end of the day beer with Doug, there is the one journal entry that describes crossing 11,300-foot Hell-For-Sure Pass and passing Disappointment Lake and how reluctant to drink from a creek with livestock, the hikers turn to the remnants of a fifth of vodka and some left over tang.

But then not to place too fine a point on Doug’s need for quiet release from life’s demands, let us not forget that there was this description of “Professor Sabiston” published in 2011 in New American Media: “With one foot on the brake and one foot revving the engine of his 1964 Plymouth Fury, Douglas “The Professor” Sabiston keeps his eyes fixed on the orange light that will flash once, twice, three times, before it turns green. Suddenly his car rockets past the starting line, touching perhaps 115 mph on the quarter-mile track.”  The feature goes on to say, “Sabiston knows a lot about time -- he’s 90.

The conclusion to Doug’s hiking book goes full circle from his dedication to his wife Dee as “steady, fearless in tight places, always helpful,” and honors all of us who shared his many trails, “You know who you are.  We will all camp together, again, at that wildly beautiful place, next to the creek, deep and remote in the high wilderness. 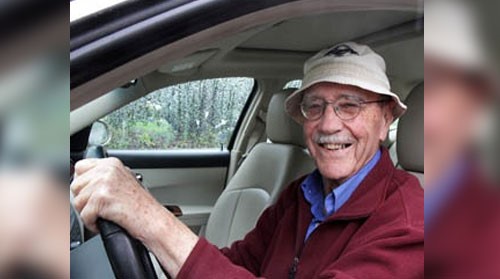